Take a Trip to Greenham Control Tower in Summer 2021 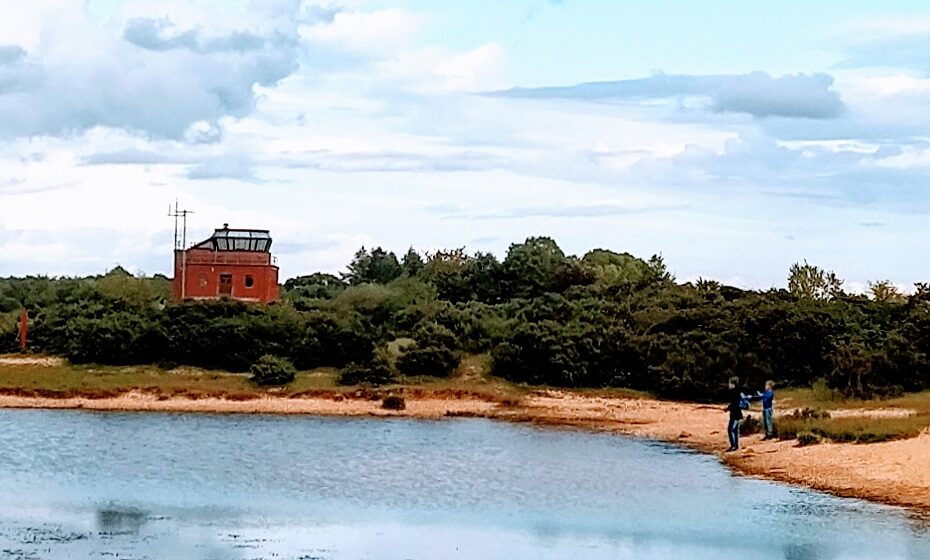 On a site of action-packed history and a stunning, scenic landscape wildlife, Greenham Control Tower in Newbury is a local landmark that’s quickly built a good reputation.  It is well-used by families and walkers on Greenham Common, and is also a small but important visitor centre of international historic significance.

Following lockdown restrictions, the Tower will provisionally be open again from mid-May 2021.

What can I do there?

Visitors come from all around the UK, and even abroad, especially the United States. Here are some of the things to do there:

‘I love coming to the Control Tower. It’s an iconic building, set alongside wonderful landscape. The views from the top floor control deck are amazing, and the volunteer staff are helpful and knowledgeable. You can blow away the cobwebs with a blast on the Common, and grab a coffee too! ’

The life of the Greenham Control Tower

The Control Tower was built in 1951 and played an important role in the Cold War of the 1970s’ and 1980s’.  At its height, it oversaw the operation of the longest runway in Europe.

The Control Tower had command over the longest runway in Europe. Owing to this lengthy airstrip, Greenham Common was designated as an alternative landing site to Heathrow both for Concorde  – and even the European landing ground for the Space Shuttle!

In 1980, Richard Noble broke the British land speed record on the airstrip, reading a speed of 245 mph.

However, when the American airbase closed in 1992, the Control Tower was left abandoned and over the years fell into a poor state of repair.

Greenham Parish Council, led by Councillor Julian-Swift Hook, came to the rescue. Starting from scratch, they fought a long and difficult campaign to buy, save and restore this remarkable historical building for the future and open it up to the public.

Once it was purchased in 2014, the restoration had to be carefully done in close partnership with Heritage Officers and legislation, to preserve the building as far as possible as it has been during its working life. As a Grade 2 Listed building, and one of only seven such towers in the country, there are very stringent measures in place.

Greenham Parish Council, with just a few hard-working councillors, staff and volunteers,  finally opened the tower to the public in September 2018, setting up a small independent charity, Greenham Control Tower Limited, to run it. And it soon went from strength to strength, with events such as the 2019 Cold War experience, commissioned by the Greenham Trust, and a loyal band of regular volunteers and visitors.

The next phase will be further enhancement of the grounds around the site.

Greenham Common has many stories to tell. Before the building of an airfield, it was a piece of common land. It was used for troop movements during the English Civil War, as it was in the 18th and 19th centuries. For some of that time it also had a firing range at its Western end.

As a piece of common land, it was a regular amenity, and the author Richard Adams (Watership Down) used to talk of family visits there in the 1930s.

The land was requisitioned for World War II in 1941, and the United Sates Air Force arrived in 1942. The invasion of North Africa was planned from here, as was the airborne element of the D-Day landings, one of the most decisive events in World War.  On June 5th, 1944, Eisenhower addressed 1430 American paratroopers at Greenham Common, before  81 C-47 Dakotas took off for Normandy to take part in the D-Day landings.

The American presence continued after the war, through the Cold War and into the 1990s. Greenham Peace Camps became regular, national headlines in the 1980s’, protesting at the deployment of cruise missiles. Finally, the final missile left for destruction on 5 March 1991. The USAF gradually withdrew, and the base was formally handed back to the RAF in 1992.

Six years after the last cruise missile left Greenham, Greenham Common Trust bought the airbase, and West Berkshire Council acquired the commons. In a small ceremony, the common land was officially returned to the people of Newbury in April 2000.

How can I get involved?

The Tower always needs more people to help – you can volunteer to help in the café or as a steward. Contact the Control Tower at info@greenhamtower.org.uk to find out more.

So, it’s an interesting building set in a varied, historic and thriving wild landscape – why not visit this summer?