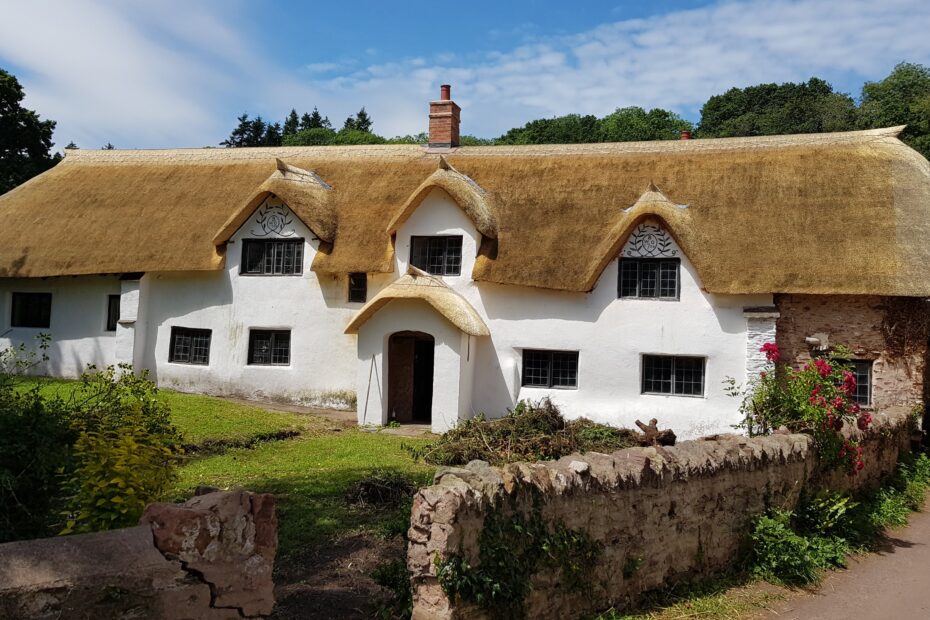 Here’s the next step in our restoration of Oatway, a remarkable and derelict Exmoor medieval thatched cottage and long-house, in Roadwater, Somerset. Check out all the stories here.

Clearly, there was lots of planning to do, but an urgent task was to fix the thatched roof, which had gone to rack and ruin over the years of neglect.

The Background Of Thatching

Using thatch for roofing goes back as far as the Bronze Age in Britain. Thatched cottages and farm buildings were the norm in rural Britain for a millennium or more. First of all, the building practices of bygone Britain ran to lightweight, irregular materials, such as wattle and daub walls. Some historians believe that these walls were simply not made to take much weight, and thatch was by far the lightest weight material available.

So how do you thatch a cottage? As explained by Britain Express, first the thatch is tied in bundles, then laid in an underlayer on the roof beams and pegged in place with rods made of hazel or withy. Then an upper layer is laid over the first, and a final reinforcing layer added along the ridgeline.

After seeking out local firms, we finally appointed West Country Thatchers. The work took place from April to July 2019.

Here’s what Bryan has to say about the thatching process at Oatway:

‘When we bought Oatway Cottage, the roof was completely ruined. Steep valleys in the roof had allowed the straw to be washed away, and water was pouring in. So, as a matter of urgency, we had to get the roof repaired, stop the water coming in, make the place watertight, and for the whole building to dry out.

The guys who did the work were called West Country Thatchers, Daniel Bishop and his team. They did a fantastic job. They stripped off much of the roof, not all of the existing thatch, because some of the existing thatch is five hunded years old. This is evidenced by black charring on the underside of the thatch, from the days when open fires existed in the rooms beneath.

It took six men six weeks to do it during May and June, so that’s 36 working weeks – it’s a BIG roof. The guys told me it’s one of the biggest roofs that they’ve done. In places, they took off up to two feet of thatch, and put up something in the order of 20 tons of new thatch on top of the existing roof.

The material they used was wheat reed, with hazel spars. The two fundamental choices you have in the UK are a water reed and a wheat reed. Up in Norfolk, you tend to get water reeds, and in the western part of the country, you tend to get wheat reeds. So the straw on the roof comes from a field in Somerset, grown in 2018/19. The hazel spars are strips from the hazel tree, which are used to tie the wheat reeds together. We had bundles and bundles of them.

They’re absolutely first class thatchers, very committed and loved what they did. For instance, when they ran out of hazel spars one day, they went up the Mineral Line, a local lane, and cut some more.

Finally, we had the hip ends netted. The jury’s out somewhat on netting. It helps to stop degradation of the thatch from birds, but at the same time, local fire brigades don’t always like it, because in the event of fire it can impede access. But we’ve had the hip ends done.

Overall, the roof looks absolutely superb. It’s finished with a beautiful ridge, and on each end of the ridge is a Somerset point. A Somerset point is the traditional way of finishing the hip end in the shape of a point.  There are no other adornments on the roof. The Somerset way is not to do too much of pheasants or embellishments – it’s a lovely clear, clean line, and the thatchers delivered that perfectly.

It looks absolutely great. The place is now totally watertight, there’s no water coming in at all, and it is doing exactly the job that it needs to do. ‘

You can check out the full photo gallery below: