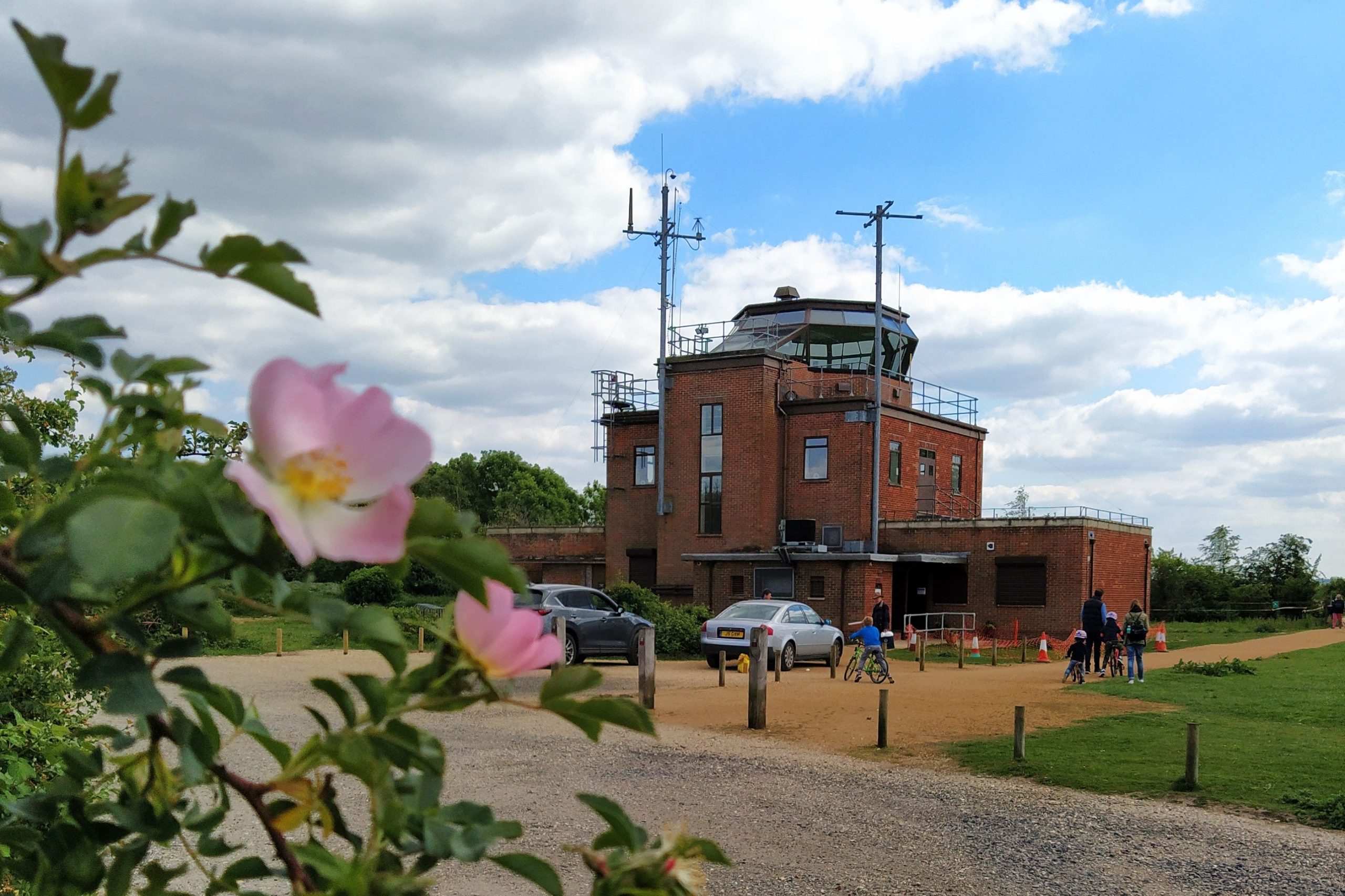 I saw on Facebook that it’s already two years since Greenham Control Tower opened to the public!

The Control Tower was unused and derelict for over twenty years, but in 2018 it was re-opened as a visitor centre and community café, and is now a real local community hub. I have a particular interest as I was part of getting it opened. This blog shares a few of the things which make the project special to me!

The Grade 2-listed Control Tower played an important part in Britain’s role in The Cold War in the 1970s and 1980s.  At its height it oversaw the operation of the longest runway in Europe.

Before the building of an airfield, Greenham Common was a piece of common land. It was used for troop movements during the English Civil War and in the eighteenth and nineteenth centuries. For some of that time it also had a firing range at its Western end.

When the airbase closed in 1992, the Control Tower was left abandoned and fell into a poor state of repair.  Led by Councillor Julian-Swift Hook, Greenham Parish Council fought a long and determined campaign to save the Tower, and finally bought the building in 2014. They did so with the goal of saving and restoring this remarkable historical military building for the future. Initially, there was a quite a bit of hostility to the project, including from the local MP at the time. They seem to have gone quiet since it opened!

The Parish Council, with a few hard-working councillors, staff and volunteers, worked hard to get it open in September 2018.  I was the Clerk for the Council 2017-2018, making sure the legals and practicals were in place for getting it opened legally and safely to the public, and for setting up the independent charitable organisation which would take forward the management of the venue, Greenham Control Tower Limited. We had very limited resources, and so much of the work was done completely for free by hard-working councillors Jon Gage, Paul Walter, and Meg Thomas. Thanks also to the excellent Andrew Cooper who the project hired as a part time project manager in the run-up to opening. We also gained a £95K Heritage Lottery Fund grant with the input from Rosemary Richards.

What can you do there?

Once the Tower opened, it quickly found its feet as a popular destination. Its Trip Advisor rating currently is 4.5 of 5, a great result for a new attraction.

Currently you can enjoy a pre-booked guided tour of the building at the weekend. You can explore the past of Greenham Common as a military base, airfield, and Cold War site upstairs in the Museum area. From the top floor Observation Area, you get a panoramic view across the common, and can find out how it looked as an airfield in the past. There is a replica of the desk used by air traffic controllers when “the base” was operational.

The café is open from Wednesday to Sunday each week, outside in the land alongside the Tower with a range of drinks and light snacks.

The building has the support of many keen volunteers, and you too can volunteer to help in the café or as a steward.

Before these unusual times, The Control Tower was available for use by local community groups subject to availability and space, and for private hire and filming subject to availability. The tower is operating slightly differently just now, but continues to see a lot of customers for the café. They are gradually increasing the attractions for visitors, with several interesting projects planned. See the Control Tower website for full details. https://www.greenhamtower.org.uk/

So, it was a challenging and complicated project. But now, Greenham Control Tower is holding its own despite the current Covid situation, and it’s great to see it going forward in such a positive way.