Our garden at Washford 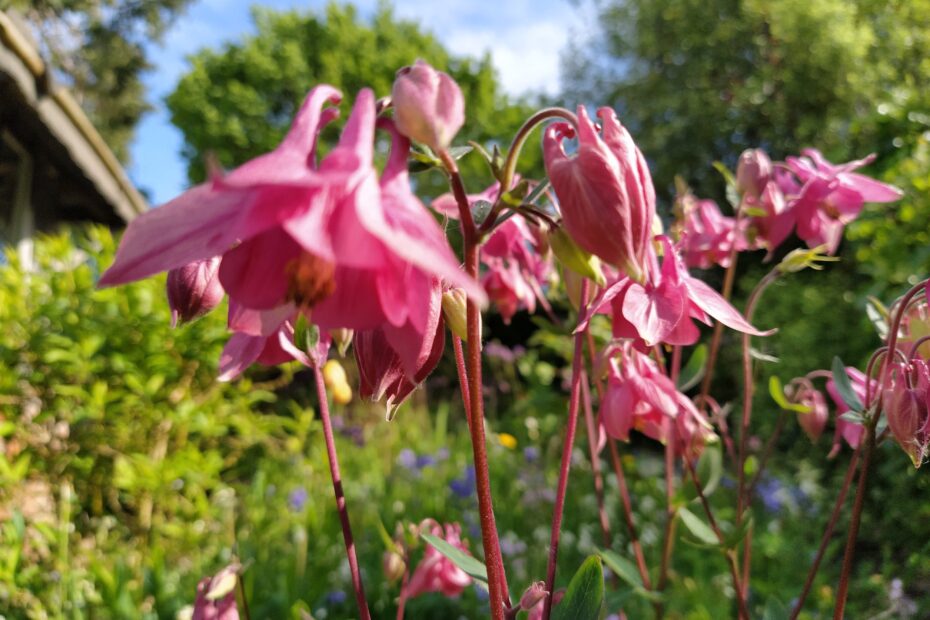 Our garden at Washford in Somerset is a wonderful piece of land.

My grandfather William bought the land in 1914, and built the house and garden, housing a shop, Post Office, and boot and bicycle repairs too in its time. He laid out the garden over an acre of land, building a pond with a footbridge, a sundial, a wishing well, a workshop, and clipped nitida hedges into the shapes of birds. The garden is full of interest and variety, and consists of a small lawn near the house, footpaths leading up the garden, a summerhouse, an old wash-house and privy, a vegetable patch, a small orchard, flower borders, endless paths in and out, steps and a terrace made of local Treborough slate, an old pigsty, and large grassed sections, formerly strawberry beds on a south-facing slope, which we hope one day to cultivate again. At the bottom of the slopes used to run the Mineral Line, which took iron ore from the Brendon Hills to the port of Watchet, and which you can follow still in parts to get to the nearby Cleeve Abbey. Grandfather William and my grandmother Ada tended the garden, with help from men from the village, followed by my parents.

The climate is really mild, tempered by the Gulf Stream in the nearby Bristol Channel. The land locally is very fruitful, and may have been used in earlier times by the monks at Cleeve Abbey. (Abbeys were sited in fruitful positions, and this part of the area was called ‘Vallis Florum’ -the Fruitful/abundant valley.)

The house and garden were out of the family for many years, but we were lucky enough to buy them back in 2014, and have spent the last seven years doing up the garden and the house.

The garden was completely overgrown when we took it back. It was a real adventure to bring the garden back from the wild, we felt like frontiersmen taming new lands! We spent a lot of time building biceps by lopping hugely overgrown trees and bushes, 20-foot long thick brambles, clearing rubbish dumped on the site. Bryan mowed the overgrown grass time and again to cut the weed growth back. The primroses are fine despite this long and repeated cutting.

So we have spent a lot of time on the groundwork of gardening – weeding, hoeing, hedge trimming, repairing outbuildings, planting hedges, – and also have found some really good people to help us recreate the garden, including Duncan the Tree Feller, Gareth the Stump Grinder, and Gardeners Anna, Sue, John and Jane, and George and Marcus on the buildings. Luckily Bryan is very handy too.

It is a huge amount of work, and can be overwhelming at times, but we both love it !

So, we’re making progress a bit at a time, and are growing a mix of fruit, veg and flowers. Here are some pictures of the garden this year.